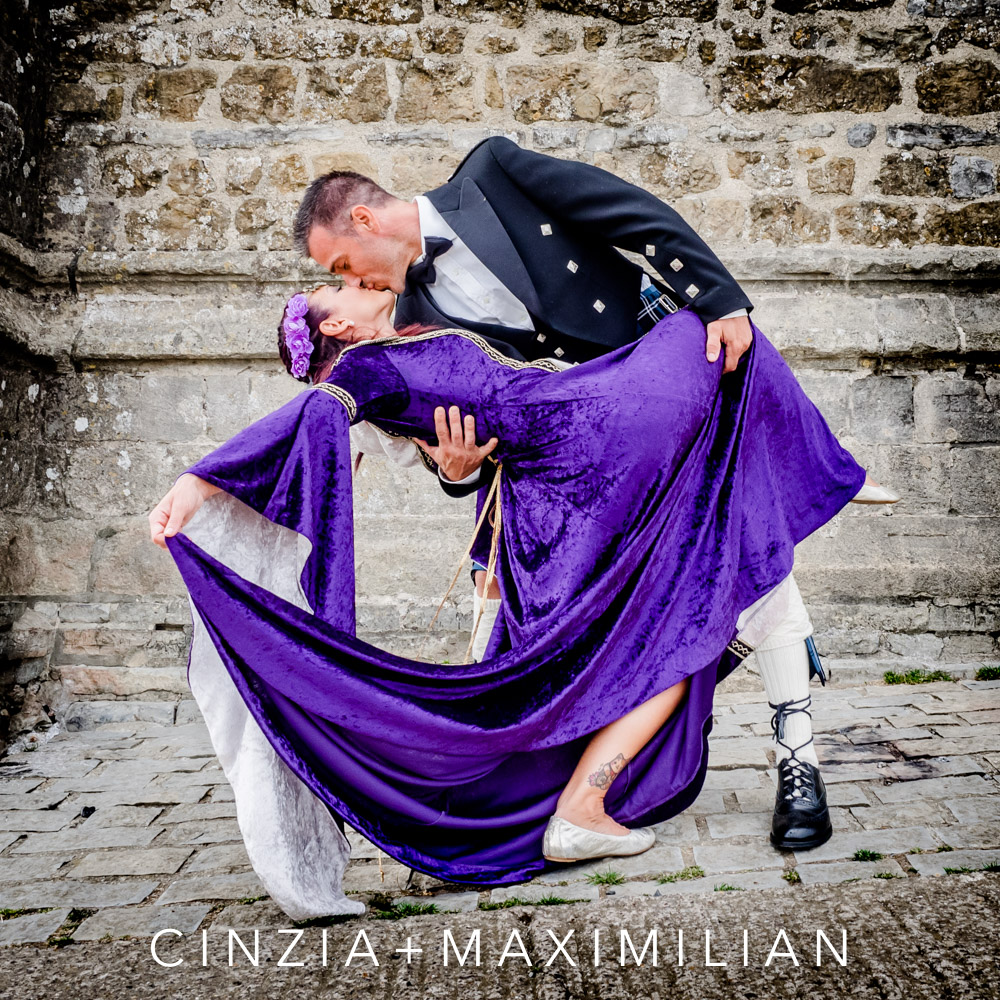 Since she was a young girl, our bride Cinzia, has always been fascinated with the legend of King Arthur and Glastonbury. The Somerset town of Glastonbury has many connections with Arthurian legends and the Isle of Avalon. In this legendary time period, Britain was a Celtic and Pagan country. Cinzia dreamed of having a traditional pagan wedding ceremony in Glastonbury.

The ceremony was to be carried out at the modern day Isle of Avalon, in the peaceful Avalon Orchard, located at the foot of the Tor. At this serene and quiet apple orchard, one can relax in peace, enjoy the many goddess circles that congregate here or witness an ancient ceremony known as a handfasting.

A handfasting is a beautiful marriage ritual based on ancient Celtic tradition. In essence it involves the binding of one hand of the bride and one hand of the groom together with cord. The celebrant wraps the cord around the couple’s hands and knots the cord 3 times. This is where the saying “tying the knot” comes from. The number 3 is very significant in the pagan traditions.

So where can one find a Pagan or Celtic celebrant to carry out a hand fasting? Well, as it happens I know a couple of ladies that do this for a living. Glastonbury based company Pagan Wedding Planners are a team of two; Jacqui Winn, a high priestess (and a witch) and our current Mayor of Glastonbury, Emma George. I have worked with Pagan Wedding Planners for many years, covering handfastings at Stonehenge, Kilve Beach and Glastonbury’s Chalice Well. Jacqui and Emma also carry out other Pagan ceremonies such as “baby naming“. It is interesting to note that although handfastings are not legally binding in England, they ARE legally binding in Scotland under the Marriage (Scotland) Act 1977.

Meanwhile back at Avalon Orchard…This was to be a very intimate destination wedding with just a team of 6 which consisted of Cinzia and Maximilian, their 2 guests (also from Italy), Jacqui who carried out the hand fasting and lastly, me!  Cinzia wore a very elegant purple pagan dress along with an enchanting wreath. Our groom, Maximilian, wore a traditional Scottish attire, by wearing a kilt and finished off with bow tie.

Jacqui opened the circle by calling out to the four elements; air, fire, earth and water. Just like many types of wedding ceremonies, vows and promises are made. Both couples take turns to give water (from the white and red springs of Glastonbury) from a horn to each other and citing the words “may you never thirst”. Then they give each other a piece of bread to eat and say the words “may you never hunger” to each other.

Rings are also present at pagan weddings. Being a circle in shape, a ring, just like a circle, has no end. This signifies the everlasting love. However, Cinzia did encounter a slight problem when it came to her turn to put the ring on Maximilian’s finger! Do enjoy the very long 5 minute ordeal of her trying to squeeze the ring on. With the help of some water from the white springs, the ring eventually made its way on Maximilian’s finger. After both rings were finally on, Jacqui then asks for one hand each so that she may bind them both together, again keeping the ever lasting bond between the couple. Then there is the distinctive finale to the ceremony…the jumping over the broomstick (traditionally called a Besom). This signifies the tied up newly weds jumping together into their future as husband and wife.

After the ceremony, I took the couple around the orchard for photos and then of course, to the top of Glastonbury Tor.