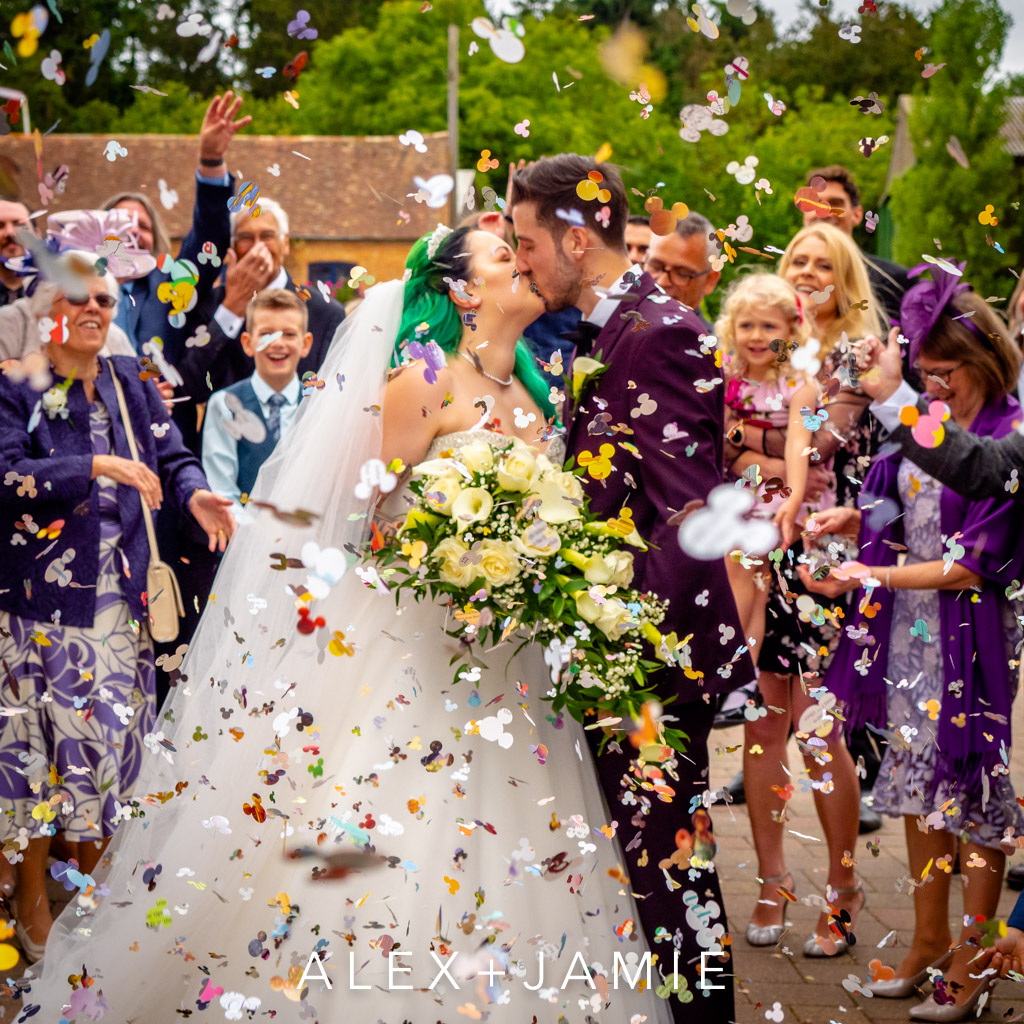 Just like fashion, colour schemes, themes and styles of venues seem to gyrate year by year. This year alone I have come across a colour scheme that is so popular (6 weddings to date with this colour), that it wouldn’t have been considered a favourite a few years back. The colour I am talking about is a dark forest green and works beautifully, especially when it comes to detail. And while getting back into the swing of wedding fairs again, barn weddings seem to be ever so popular again. I have always known about Bassmead Manor Barns, but never had the opportunity to photograph a wedding here until now. With another wedding here to do on the 8th October 2021 and another next year, I was really excited to know that I was chosen for this very well known wedding venue. Couples instantly fall in love with the venue, especially the 300 year old traditional beamed barn, the Rickety Barn.

A few years ago, Alex had an interview for a head chef position by the man himself, Jamie at Wetherspoons. The manager and Jamie came to the conclusion that the interview was successful and Jamie was her boss for a while. After some time, they then both moved brewery and have worked there for 5 years. Things as mentioned from the start of this journal rotate in life and Alex became Jamie’s boss and now Jamie is head chef. With the culinary and chef theme, I can also understand another reason why they chose Bassmead…the food. The food is insanely brilliant, from the most tender, delicately cooked fillet steak, to the ingeniously made pork spring role.

Alex is crazy about Disney and added this to the theme of the wedding. She actually cut out all the Mickey Mouse confetti but I will give commentary further down regarding the confetti shot. On one vacation to Disney Land, Florida, Jamie proposed to Alex in Magic Kingdom in front of the castle whilst having their photo taken. With a total surprise thinking that they were having their photo taken, as Alex turned round to see what was going on, Jamie was there on one knee, asking her to become his princess.

There was so much to work with on the wedding day; cathedral length wedding veil, Darth Vader and a Stormtrooper models, Mickey Mouse confetti, bridges, a barn, courtyard and a hen, which I named Sam. Yes, that is right, a real live walking chicken. Weather wise there was a tiny bit of drizzle and a constant medium breeze, which was enough to make a confetti shot biased to one direction, so I had come up with a plan. I decided to block the entrance of the courtyard by creating a horseshoe of people in hope to create a wind shield to keep the confetti hovering around. And hover it did! My plan worked and the Mickey Mouse confetti floated around magically and bounced around for a very long time. I even had some make its way into the lens hood! It was an awesome shot with so much going on. You can see the happiness in these sequences.

I really experimented with Alex and Jamie’s bride and groom shoot. To some people this might sound like a crazy gamble, but it is the confidence in my professionalism that allows me to explore. There is also an element of trust between photographer and the couple. It is like I combined all my knowledge with the personalities of Alex and Jamie, and it projected well. Even right until the end, their first dance song left an impact within me which I will carry for the rest of my life. I could relate to the song, so I could feel the passion that Jamie has for his wife. The song was “Die a happy man” – Thomas Rhett.